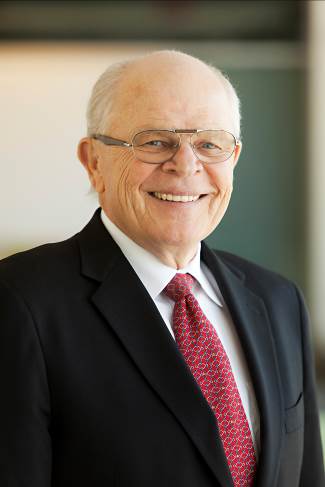 Ronald Offutt, of Fargo, ND, was nominated by the Northern Plains Potato Growers Association. Ron is the Founder and Chairman Emeritus of the R. D. Offutt Company, the nation’s largest producer of potatoes. The company is comprised of a variety of businesses divided into three separate operating units: agriculture, food processing and retail equipment. Its cornerstone is a nine-state 190,000 acre farming operation, with the majority of its 60,000 potato acres under center pivot irrigation. Part of the farming operation includes a 34,000 acre farm and dairy operation in Boardman, Oregon, which consists of three dairies, milking 25,000 cows. The company also operates food processing manufacturing plants and markets its crops through relationships with major processors, such as Simplot, Con-Agra/Lamb-Weston, McCain Foods and Frito-Lay. Internationally, RDO formed a joint venture with Calbee Corporation in 2006, to build a plant in Boardman, Oregon, to source potato product for snack food in Japan and other markets. This has expanded to the formation of Calbee North America and an additional plant in Fairfield, CA.  RDO operates a 22,000 acre farm in Krasnodar, Russia as well.

Ron Offutt is also the Founder and Chairman Emeritus of RDO Equipment Co. Founded in 1968, this company owns the largest network of John Deere construction and agricultural equipment dealerships in the country. Vermeer, Topcon and Volvo and Mack truck centers are also integral operations of the company, which now have over eighty US locations, in ten states. Internationally, RDO Equipment Co. is a John Deere Agricultural and Construction Equipment dealer with partnerships in Russia, Ukraine and Australia.

Ron is one of 41 recipients of the Theodore Roosevelt Rough Rider Award, which recognizes North Dakotans who have achieved national excellence in their fields of endeavor. He has also received numerous other regional and national awards for his contribution to agriculture. Ron continues to be active in the community, serving on multiple other boards and dedicates his time to several organizations and charities. He and his wife Karen, have six children and eleven grandchildren.