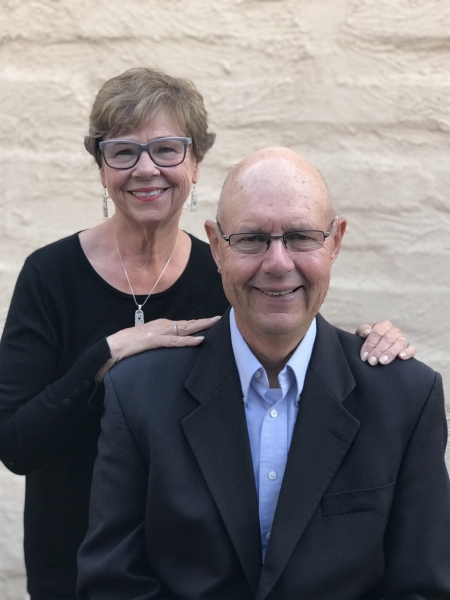 Jim and Jody Hauge of Mandan, ND have been married for 48 years. Jim grew up in rural Grant County, attending Wheeler country school and Carson High School. He went on to college at North Dakota State University and received a Bachelor of Science Degree in Agriculture Economics in 1970. Jody attended school in Lisbon, ND and also went to college at NDSU and Valley City State University. Later, Jody returned to college and graduated in 1994 from the University of Mary with a Bachelor of Arts degree in English, with a minor in Business Communications. After meeting at NDSU, Jim and Jody were married in 1971, and have been partners both on and off the farm ever since.

Jim and Jody have made many contributions to the agricultural industry, with dedicated work on their family’s progressive farm, ranch and feedlot, as well as in numerous agribusiness, industry organizations and public policy roles. Shortly after Jim and Jody married, they began their operation with 17 cows and 15 sows. In 1972, they rented a neighboring farm, which would support approximately 100 cows, and began raising pigs and backgrounding calves. In 1976, they moved to the original Blue Hill Ranch farmstead alongside Jim’s parents, Grant and Edith Hauge. They purchased a portion of the home quarter to build a house and a confinement hog barn. They farmed cooperatively with Jim’s dad until 1983, when he retired.

At this time, the operation had grown to a 300 head cow and 80 sow confinement farrow-to-finish hog operation, along with feeding 400-500 calves each winter. In 1985, they enrolled in a new “Great Plains” Soil Conservation Service technology program. They completed extensive cross fencing, pipelines and centrally located water tanks, to begin their extensive grazing program, along with a progressive no-till operation to sustain the land for future generations.

They relocated their backgrounding feedlot in 1995, four miles northwest of the main farmstead. The 900 head herd amassing to the present 4,000 plus head capacity.  In 1998-1999, they designed and built their concentrated animal feeding operation (CAFO), approved holding ponds and clean-water diversion around the feedlot. Jim and Jody were then granted a CAFO permit for 999 head. They increased the permit two more times and it is presently permitted for 6,500 head of backgrounding calves. By 1998, their cowherd had grown to about 550 head, and the farrow-to-finish hog operation grew to about 150 sows.

Jody and Jim have 3 children. Jamie, their eldest son, graduated from NDSU and worked for 5 years in Nebraska as a marketing specialist for a livestock company. Jamie, his late-wife, Jolene and their daughter Jacy moved back to the farm in 2000. He married his wife Deb, and they have two boys, Grant and Hayden. Clair, their youngest son, graduated from NDSU and worked for Farm Credit Services and Bremer Bank as an Ag Lender for four years. After his wife Jennifer graduated from law school, they joined the partnership in 2004. They have four children, Anna, Kaitlyn, Luke and Brady. Their daughter, Shannon, graduated from NDSU, and currently resides in Bismarck. She is the Enrollment Coordinator for Light of Christ Catholic Schools and her husband, Jeff, manages the Coca-Cola production facility. They have two boys, Andrew and Ian.

Following the return of Jamie and Clair to the farm, they added an embryo transplant program in 2001, and discontinued the hog operation in 2002. In 2005, Jim and Jody formed a farming and ranching general partnership, Blue Hill Ranch, G.P; with Jamie and Clair, as partners. The Blue Hill Ranch Feedlot Inc. was formed in 1999.  In 2006, they celebrated Blue Hill Ranch’s centennial with a family reunion hosting over 160 relatives.

There was always the hope that the next generation would return to Blue Hill Ranch. Jim and Jody had one rule prior to coming back to join the partnership… you must work for someone else for four to five years. This has served the current generation well and has attributed to their continued success.

In addition to running a successful operation, Jim was President of the ND Pork Producers Council, served on the Executive Committee of the National Pork Producers Council, and later was the Chairman of the National Live Stock and Meat Board during the merger with the NLSMB and NCA, forming the current National Cattleman’s Beef Association. He was an honorary charter member of the NCBA. Jody was President of the ND Pork Producer Women, Vice President of the National Pork Council Women, and served on the Executive Committee of the National Pork Producers Council. She also served on the ND State Board of Animal Health, was a charter member of SBARE (State Board of Agricultural Research and Education), and Chairman of the ND Ag Coalition. Jim and Jody were named the 2001 Saddle & Sirloin Agriculturists of the Year, making them the first couple to receive the honor. Jim was also named the 1995 NDSU Master of Agriculture and the 1992 Alpha Gamma Rho Outstanding Alumnus. Jim is currently serving on the State FSA Board as Chairman. Both Jim and Jody are active volunteers in their communities and beyond. They proudly support God’s Child and have gone to Guatemala to build raised gardens for the local school. Jim also serves with Stephen Ministries, they visit with the local nursing home residents and Jody is a member of PEO.

In 2007, Jim and Jody retired from farming and moved to Mandan. At that time, Jim began his second career as an Agricultural Consultant with Eide Bailly. He worked with farmers and ranchers in the upper Midwest sharing his years of experience, particularly with succession planning and preparing for the next generations of farmers and ranchers.

Their greatest accomplishment has been raising three children that have grown into adults, with continued passion in their fields, giving back of their time and treasure and giving all glory to God. From their children, they have nine grandchildren, who continue to be what brings them joy every day.

Jim and Jody are happy there is a 4th generation, and potential 5th generation to carry Blue Hill Ranch forward, beyond 110 years.